Like with past summers, I thought I’d share some of the things our summer researchers are investigating. In 2016, the team created computational prototypes focused on real-world workflows ranging from building analysis to geometric interoperability. In 2017, the focus was on data analysis and resulted in building data visualization workflows and the first version of our machine learning toolkit: LunchBoxML.

As part of our first month into the 2018 research internship, the team has been exploring the intersection between evolutionary solvers and gaming technology. Maren Elnes and Ian Spadin have been collaborating together to create a computational workflow which utilizes Grasshopper with Octopus for multi-objective analysis and then feeds the results into a custom Unity-based solution explorer.

This summer, a new plan was announced as part of Council Bluffs’ and Omaha’s Missouri Riverfront Revitalization project. Since this plan impacts our own backyard of downtown Omaha, we thought it would be fun to study a new digital workflow based on a portion of the plan created by OJB Landscape Architecture.

A simple parametric model of the site program was created with parameters controlling the location and orientation of major site features. The team then implemented a Rhino-Grasshopper-based evolutionary solver called Octopus which was given objectives considering solar orientation, travel distances between site features, and position within site grading. The workflow produced hundreds of site layout options each with measurable differences in the stated fitness criteria.

Many of these options could easily be discarded due to a variety of practical considerations but others seemed to semi-viable alternatives. For us, it was interesting to observe how the evolutionary solver produced options with radically different layouts than the one suggested in the original riverfront plan.

To explore these options, our research team created a Unity-based game that allows the user to sort and prioritize options through a game-like interface. This was achieved by directly transferring the geometry and metrics into Unity and designing a custom user interface for navigating the 3D model and dynamically loading the layouts. 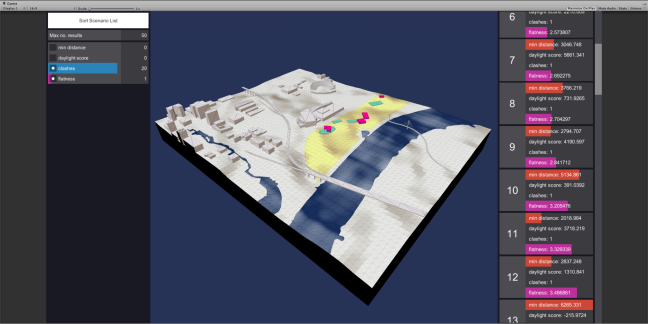 As the summer continues, we are further exploring practical uses cases for evolutionary solvers and game engines in the design process. We are presently looking at use cases for using another evolutionary solver, Autodesk Refinery, for optimization workflows tied to building information. We are also beginning to explore connections between our Minecart database and Unity for interactive data querying.